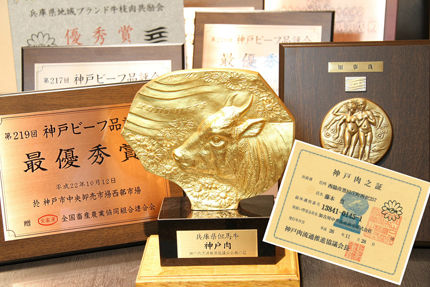 Our predecessors worked to establish and protect a pure breed, creating a strictly controlled environment in which cows are fattened and cared for day and night, only selecting those that have passed extremely rigorous inspections. Even after a successful bid, every step of “Kobe beef” distribution processes strictly monitored. A carcass that is qualified as “Kobe beef” after going through strict procedures at one of five meat markets and slaughterhouse in Hyogo prefecture has its quality guaranteed by the “Kobe beef certificate of authenticity”, which is issued for every individual cow. There are three kinds of trademarks designated for “Kobe beef”. Only beef that has received “Chysanthemum Flower stamp” or “Kobe beef certificate of authenticity” is allowed to carry the name “Kobe beef” in the subsequent distribution process. Restaurants are members of Kobe Beef Marketing, Kobe beef restaurant are required to display their bronze statue at their shop front by the Kobe Beef Marketing and Distribution Promotion Association as a proof of authenticity so that customers and consumers may enjoy the taste and values of “Kobe beef” without worrying about its provenance.​ ​

In order to protect the “Kobe beef” brandInformation regarding each cow is publicized! 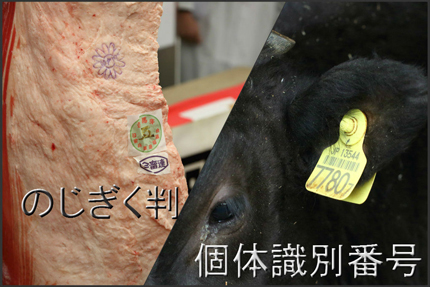 Today, the distribution system of “Kobe beef” is very strictly organized; however until 1975, the definition of “Kobe beef” had not been as accurately specified as it is today. In other words, there were no reliable means of proving the authenticity of “Kobe beef”. In order to avoid confusions in the minds of consumers and the general public, the Kobe Beef Marketing and Distribution Promotion Association was established. The association started out as a collaborative venture between by producers of Tajima cows, meat distribution industry officials and consumers, and had three aims: (1) to clarify the definition of “Kobe beef”, (2) to designate traders and breeders, (3) to specify all wholesale stores, retail stores and restaurants of “Kobe beef”. It was not until the association was founded that the “Chysanthemum Flower stamp” and “Kobe beef certificate of authenticity” came to be used as proof of authenticity. In 2006, the association had its trademark registered and since then, all breeding farms, fattening farms and traders of Kobe Beef are specified and registered. According to a tracking system, each of the cattle is given an identification number though which its meat is traceable at retail stores and restaurants. We are able to record and trace detailed information such as birth, parentage, breed, farm, grade and a retail shop. In order to safely deliver “Kobe beef” to customers, we are making continuous efforts.
→A tracking system to trace the exact provenance of Tajima Beef