KISSHO the champion Kobe cattle to buy one head?

With the name "Kobe Beef Exhibition" "Kobe beef carcass sharing ceremony" etc., the Kobe beef 's serve with Tajima bee is held about 50 times annually in several places in Hyogo prefecture.
"Champion Kobe beef" which awards the prize of the first prize which was judged to be the most excellent meat quality by only one head every time it is served is born.
Since it is about 50 times a year, about 50 champion Kobe beef are produced in one year, but the KISSHO group has purchased more than 15 of them. 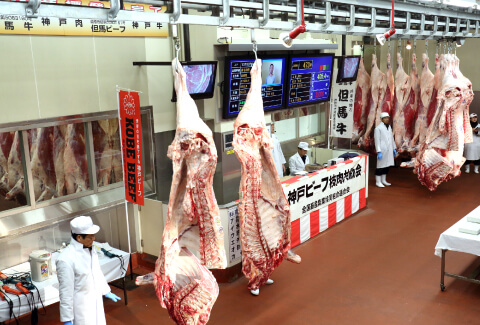 Other than the champion, we purchase all the winning cattle up to the 4th prize of the Excellence Award, Excellence Award, Honorable Prize, purchasing one cow at a time other than the champion, purchasing parts of the winning cow also to compensate for some consumption amount I will.
Last year, 1,839 Tajima beef were hung on the galleries during the Heisei 20-year results, of which 4679 Kobe cattle were born. Only 50 of them will be champion Kobe beef, and it is said that the KISSHO Group has purchased more than 15 of them. Champion Kobe beef is 1.06% in Kobe beef. From the figure that it is only 0.42% when looking at Tajima cattle as a whole, you can see how extremely rare and the best quality beef is from the figure.
"It is impossible to say that it is absolutely cheap price as absolute value only for those of the highest quality that rarely passed through this strict standard and competition.
However, I bought a whole in KISSHO . By doing all the molding and cutting and cutting of fat and oils by our own processing, we can offer the most expensive champion Kobe beef steak in the world from the price of several thousand yen per person.